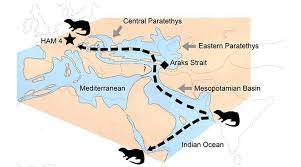 Between 12.5 million and 14 million years ago, members of a genus of otters called Vishnuonyx lived in the major rivers of southern Asia.