What Are Chemical Weapons? 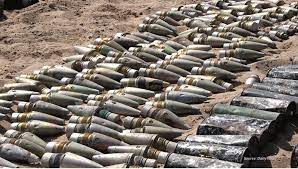 The US said that Russia could be planning a chemical or biological weapon attack in Ukraine.