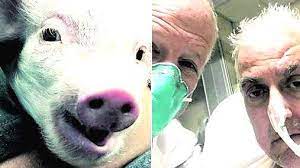 In a medical first, doctors transplanted a pig heart into a patient in a last-ditch effort to save his life in the US.