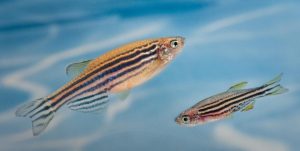 New research in zebrafish has demonstrated how induced hibernation (torpor) may protect humans from the elements of space, especially radiation, during space flight.