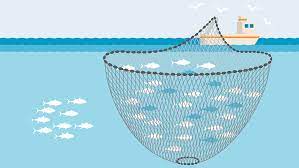 Certain coastal states had imposed a ban on purse seine fishing. But the central government has criticized the move and said it is unjustified.