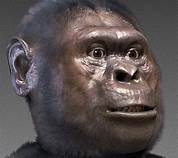 The fossils of our earlier human ancestors, located in a cave in South Africa, are a million years older than previously understood according to a new study published in the journal Proceedings of the National Academy of Science.