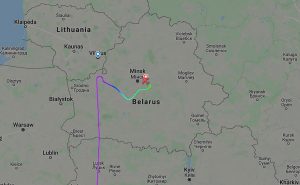 Belarus, the largest landlocked European country bordering the two warring nations has found itself in a precarious position amid its political proximity with Russia.