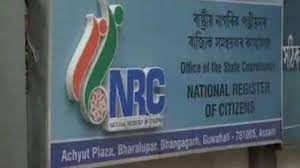 The Comptroller and Auditor General of India (CAG) has detected large-scale anomalies in the updating of the National Register of Citizens (NRC) in Assam.