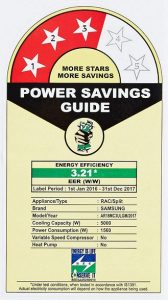 Ceiling fans have come under the ambit of mandatory star labelling from January 1, as per the revised Bureau of Energy Efficiency (BEE) norms.