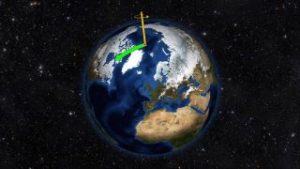 A study published in Geophysical Research Letters of the American Geophysical Union (AGU) says that due to the significant melting of glaciers because of global temperature rise, Earth’s axis of rotation has been moving more than usual since the 1990s.

Findings from the New Study: