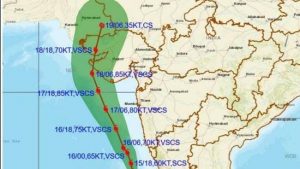 Cyclone ‘Tauktae’, which lay like a deep depression over the Arabian Sea close to Lakshadweep, was likely to intensify into a ‘very severe cyclonic storm’ with wind speeds of 150-160 kmph gusting to 175 kmph, bringing heavy to very heavy rain to many parts of the western coast, the India Meteorological Department (IMD) said.