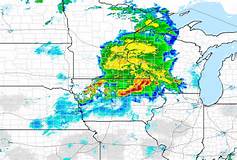 A few States of US were hit by a storm system called a Derecho, turning Sky Green.