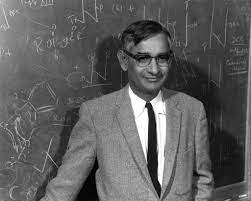 The 100th birth anniversary of the biochemist and chemical biologist Har Gobind Khorana was observed.