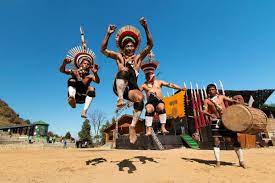 In Nagaland, the 10-day long Hornbill Festival 2022 will begin on December 1, at Naga heritage village Kisama.