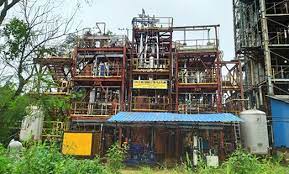 India has developed an indigenous technology to convert high ash Indian coal to methanol and established its first pilot plant in Hyderabad.