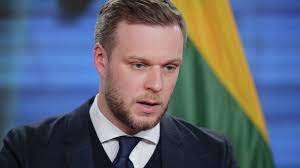 Lithuania said it was quitting China’s 17+1 cooperation forum with central and eastern European states that include other EU members, calling it “divisive”.