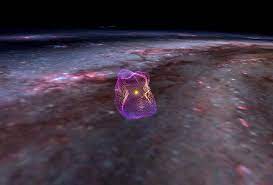 New research on a giant cosmic cavity that surrounds the solar system could reveal the universe’s secrets, including questions about the origins of stars.