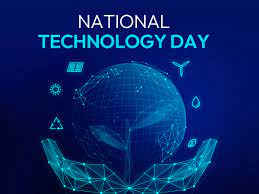 Since 1999, May 11 is celebrated as National Technology Day to mark India’s technological advancements.

Significance of the day: