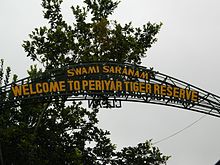 For the first time in the country, the Periyar Tiger Reserve (PTR) in Kerala has taken up the training of a tiger cub to equip it to naturally hunt in the forest environment.