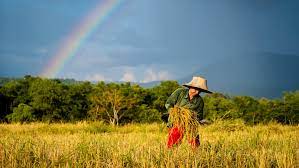 The Scientists from the Chinese Academy of Agricultural Sciences have shown how a transcriptional regulator can boost grain yields and shorten the growth duration of rice.