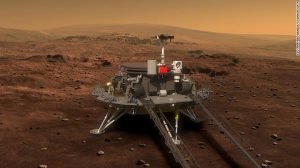 A Chinese spacecraft named Tianwen-1 has successfully entered orbit around Mars on February 10, 2021.

The objective of the mission