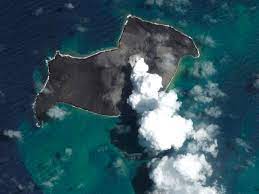 A volcano erupted in the southern Pacific Island of Tonga, which triggered Tsunami waves around the Pacific.