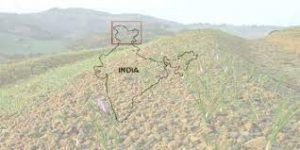 In the name of development, Kashmir’s highly fertile alluvial soil deposits called ‘karewas’ are being destroyed.