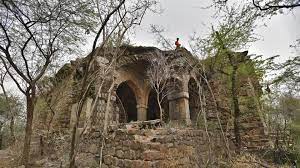 The Delhi government is about to renovate the 14th century monument Malcha Mahal.