What Is Seafloor Spreading? 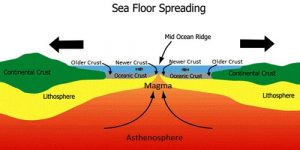 According to a study that analyzed data from the last 19 million years, Seafloor spreading rates have slowed down by roughly 35% globally.