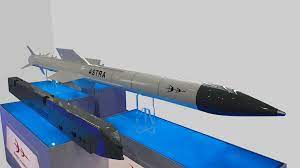 Ministry of Defence has signed a contract with Bharat Dynamics Limited (BDL) for supply of ASTRA MK-I Beyond Visual Range (BVR) Air to Air Missile (AAM) and associated equipment for the Indian Air Force & Indian Navy at a cost of Rs 2,971 crore under Buy (Indian-IDDM) category.