Corporatization Of Ordnance Factory Board: 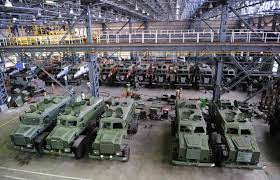 The Union Cabinet approved a plan to corporatise the Ordnance Factory Board (OFB).