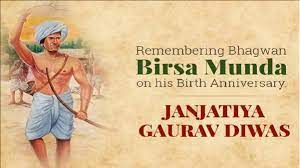 To commemorate the contribution of the tribal freedom fighters, the Ministry of Education is celebrating the ‘Janjatiya Gaurav Divas’.