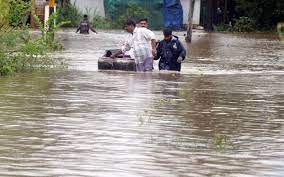 Kerala once again stares at a flood-like situation, similar to the one in 2018, with high intensity rain triggered by strong monsoon winds.