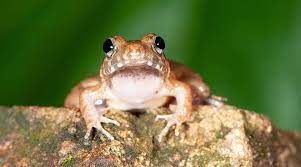 A new frog species was discovered in the Western Ghats and named after former DU Vice-Chancellor and plant geneticist Deepak Pental.