Order Of The Druk Gyalpo Award To PM Narendra Modi: 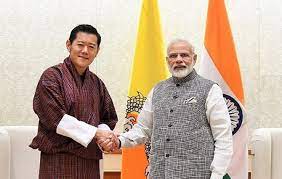 The King of Bhutan, His Majesty Jigme Khesar Namgyel Wangchuck, conferred its highest civilian award, the Order of the Druk Gyalpo, on Prime Minister, Shri Narendra Modi on the occasion of the country’s National Day.