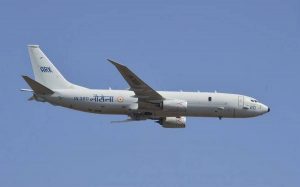 The US State Department has approved the sale of six P-8I patrol aircraft and related equipment to India.

About the P-8I Aircraft: